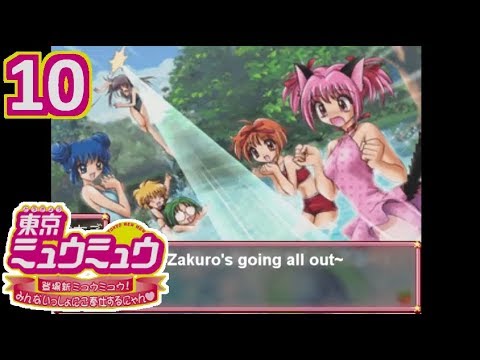 In this part the girls head out to Ringo’s secret spring and then enjoy the atmosphere and beauty for a bit!… until…

(From the Tokyo Mew Mew Wiki)
「The game follows the Mew Mews as they meet a lonely girl named Ringo Akai. Her mother is deceased and though she lives with her brother, her only proper friend is her pet penguin Yuki. As the game progresses, Ringo warms up to the Mew Mews and they become good friends.」

It's like Ringo is leading you through the lost woods or something. There better be a sword at that spring for all the trouble this is.

9:01 And that is Mashio's mind snapping. So much for secret identities… Then again if anyone else saw the Mew Mews on the island and if they keep records of who comes and goes on this island it wouldn't be that hard to put two and two together on this.

Ringo is a healer. Oh she is definitely a keeper.

Wow, the "This way~" sweatdrop section sure does go on for a while.
We finally meet Mashio! I wonder if the game's plot was influenced by episode 8. Masaya sure has a lot of clones running around… Actually, is that ever addressed at all? I think there was a headcanon about DB having extra bodies just in case…

Well, since this is the latest one (and have seen all of it so far), might as well say, nice commitment to subtitling the TMM PS1 game, kinda sad no one bothered to actually translate the game up until now. Though it would have been nice to translate the in-game text proper in the game's code to English, but I heard things that its not possible due to the way the disk protection from the game itself, even by trying to do so with a disk loader program to extract the game contents, believe me, I've tried. (Unless otherwise noted.)

Either way, yeah, have since played it before and finished it, but I've stopped due to other commitments, and was trying to get everything in the game 100%, though that may take a long while, lol. (May come back to it eventually…) Although, due to the way the game's mechanics for the friendship (+) system works, there may be certain parts of dialogue in specific scenes for certain characters so not that not 2 scenes are alike if taken the right choices. So either multiple playthroughs may be necessary , or save stating at specific scenes. (Yeah, that would take very longer as a full/complete commitment translation, lol.)

Lastly…your "English Battle Guide" comes up with an empty page (aka "not found") on the link, you may want to fix that, since that is in all 10 of the translation vids so far. Either way, looking forward to the rest in due time, and hopefully the rest of them don't have much recording problems.