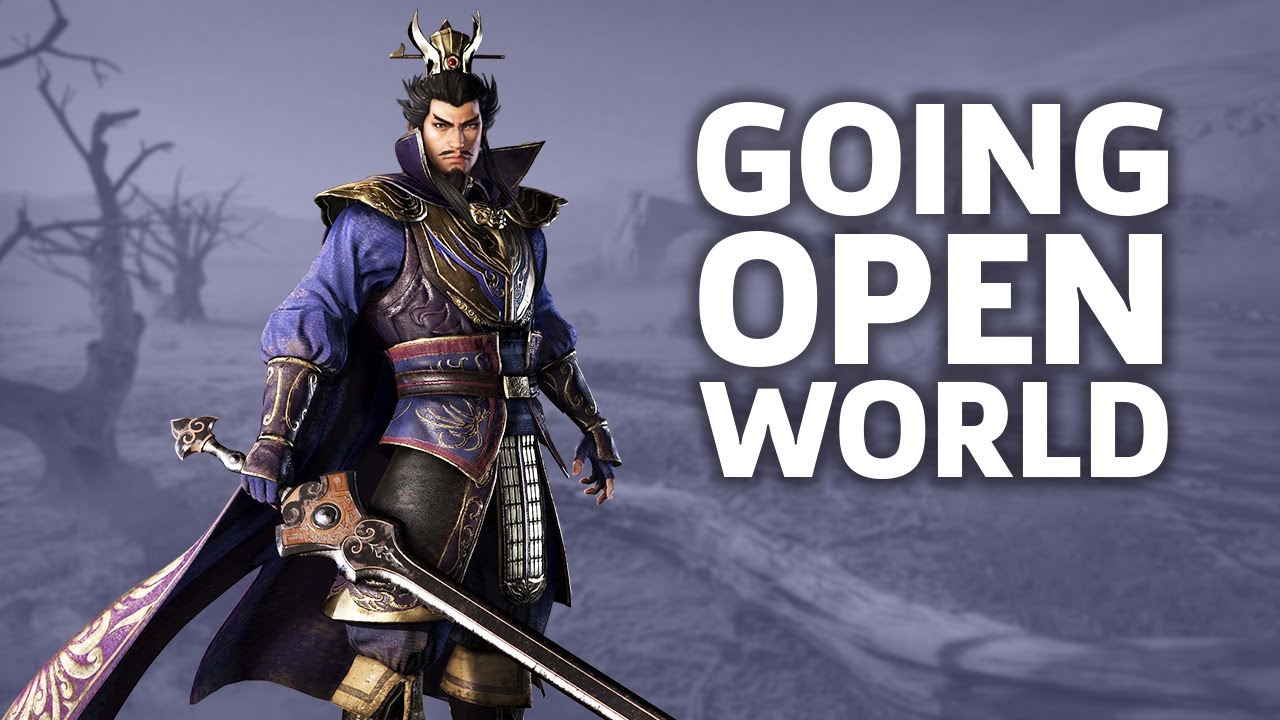 This game was washed up 5 years ago. I would love for koei to sell the rights to dice to see 64+ player battles with just swords, pikes and bows.

I miss the Dynasty Warriors 9 hype. Wonder what Koei has planned in store after Warriors Orochi 4.

"The same procedure as every year."

They should've made it look old without these fancy clothes and these stupid colorful lights another thing the soliders are always standing still ready to get hit like dolls , but I'll still a huge fan of this game cuz I believe one day they will make it like we want .

LOOOOOOOOOOOOl they dont even move, the peons, just stand there while CAOCAO slashes them on horseback like immobile zombies. Game is Trash!

Is it me or does Dune sound a little southern?

why is the IA so retarded?

I don't understand… why don't they just increase the attack speed of all characters? That way the peasants LOOK like they're fighting and worst case scenario is that 5 year olds won't be mature enough to play it. A whole lot of nothing is happening on screen. Boring… yawn fest

The first 2-3 hour of gameplay i felt like every damn critics on the world ever…. first noticeable thing is the fps .. that damn awful fps whenever you fight hundreds of thousand of enemy on the battlefield (from Cheetah to Turtle real fast) then i came across the ''empty open world'' then i was like ''damn dem hater/critics were right .. it is pretty dull'' but then i just keep on playing and ''exploring'' (i use that world very lightly) and after killing hundred of officer and progressing through main quest and silly side quest like hunting and (i kid' u not) FISHING …. Yes its a thing apparently .. and played some more.. well unknowingly i started to dig the gameplay .. its more like a MGSV/Assasin's Creed wannabe (which i love the heck out of both them) and i start to actually enjoying it LOL

1. FPS yeah the main fuckin issue is the damn FPS (which they working a patch for it atm) but damn it really cut out 50% of the fun since the major fps issue only occur when u trying to hack n slash your way into thousands of enemies…

2. (You guessed it) THE EMPTINESS of the OPEN WORLD… (well there are still tons of thing you can do in the game aside from killing enemies .. like some silly shit like buying house,decorating your house,Hunting,hunting for herbs and shit,crafting (you can craft the heck out of a weapon which is my personal favorite) and many more..(its not like what the ''reviewers'' tells you .. its not COMPLETELY EMPTY i mean there is plenty of towns where you can do shit .. the major emptiness is when you travels with your horse through the ''vast land'' where there is plenty of trees,ingredient and woods…and yeah plenty of enemy to kill)

3.Each Character doesnt have their ''unique weapon'' (well technically they do .. you start off with their own weapon like Liu bei with his twin blade,Zhao Yun with his Spears etc.. but i think what the fans dont like is that you can use any weapons on any character no ''special weapon'' for each characters.. i mean tbh its not a big deal since you can just craft the shit out of their ''unique weapon'' and use it till the end (and i understand why they did this .. for example if u maxed/finished 1 character's story line and you want to use other character .. it'll be pretty annoying to start from lvl 1 and craft/farm your way to max .. hence the ''you can use any character's weapon'' system .. if u have a max ranked character .. u can use his weapons when u play on a new character so it doesnt make it that annoying to start over) so yeah on the weapon system i'll cut them some slack 😉

Anybodu know what is ost at 4,25 onward?

Ok so for all you haters out there ima give ya a run down on what the game is like for me so far. I have went all the way to 100 with Cao Cao and and I have noticed good voice acting and bad voice acting Cao Cao for example was done better then most but still didn't feel like cao cao and then theres bad voice acting which goes to Xun You, his voice actor is terrible because of things like stopping in the middle of a sentence where it didn't even belong or switching tones really quick in the same paragraph. I have noticed a lot of bugs such as falling through things to bad pathing, they also are having fps lag which took its toll on steam and people are giving downvotes for no reason. So for optimization I would give about a 5/10 and voice acting 6/10. now lets get to the goodies which is why I still have the game, The game features new combat like you have never seen in any Dynasty Warriors game before and it feels amazing when you get your hands on it and there weapon effects are really nice to (so far ive really only messed with fire ice and wind but I feel its enough) they also have a pretty nice crafting system that is a big part of you getting new weapons and equipment,battles are invigorating and they did an excellent job recreating the ancient battle fields we love so much. This alone is enough to keep me playing because im not here to listen to pretty voices or have 60 fps im here for a game and believe it or not they gave me one whether you think so or not so for gameplay and mechanics I would give it a 10/10. Im not giving an overall because I never have, I rate specific aspects unlike certain plebs that look at the title and say nope trash without even givin it a try and to them I give them a 0/10 🙂 have a nice day peeps and I really hope you buy this game its a good play.

Never have I ever hated to hear the voice of Sun Jian. Where is the mighty roar of the tiger, all I hear now is a fucking house cat.

Hp still full for some enemies. Is that a bug?

So….why did they replace all the real voice actors for shitty ones?

The map is too complex, i don't like it

I know DW isn't really a game to be good at, it's easy as hell but I was cringing a bit when the guy playing was flailing wildly at nothing.

After DW5 I shown no more interest, Dynasty Warriors fell out of the category of a good game for DW6 and onwards… however I really do believe this is the reincarnation of the series and there is so, so much potential especially when you imagine what they could do with open world + multiplayer, it's every true DW fans dream!

Well the voice acting in English dub is shameful oh well guess i better put on Japanese dub like dw8 empires seriously i love cao cao voice actor in dw8 there's no way in a update they can fix this with better voices?

With AI like this I don’t think you could possibly die unless you are a complete moron. This looks terrible. Then again it is a dynasty warriors game. Is it at least a Budget title?

At least the dub is better than ride to hell

this reminds me more of kessen 3, which isnt a bad thing as i loved that game as a kid

lol whats up with the horribly lip synced portraits that keep popping up? might as well have used stills, at least that wouldn't look half assed.

I just from super hyped to super disappointed. They really fucked up with these voice actors and cloned weapons. Come on…

Looks like they still had it tied to 360/ps3 graphics, and then changed there minds but did not bother upgrading them. FPS is terrible, dr distance as bad as it was in DW6 onwards. Openworld elements do not add to the game, and with vast open space of nothing and each base having same pop in enemy and numbers every time it, feels like this game is made as a test bed rather then full release. GREAT ideas, and going in the right direction, really needs to sharpen frame rate, and so enemies much further afield. If games with much more going on like Dead Rising, and other RTS games can have hundreds on screen, a much higher distance there is no reason not to here, apart from being lazy.

Wow they really made it as shitty as possible 👏

changing the settings to chinese voice the moment i start this game, god dam they ruined the persona of so many of the characters with new voice actors.

Why did they make it a open world? It's gameplay doesn't work for that type of game.

I get worked up just watching you.

Oh my god Xiahou Dun! What happened to Kirk Thornton??? Where is that badass grit he used to have?

That dubbing…I'm just going for the original Japanese dubbing. Heck, I heard that there will be Chinese dubbing for this game too so I might go for that too if available.
This game looks like it still needs a lot of work. Difficulty wise, maybe this part is meant to be easier since fighting the Yellow Turban is set early in the story before the war between Wei, Wu and Shu. I'm having my doubts here. So far since its announcement, the only thing I like about this game is the character designs and some new features stated in the website. I don't know, part of me feels like this video isn't showing off anything else other than the bare basics of this game.

I didn't know they were still making PS2 games?